Republic of Colombia  is a unitary constitutional republic comprising thirty-two departments. The country is located in northwestern South America, bordered to the northwest by Panama; to the north by the Caribbean Sea; to the east by Venezuela  and Brazil;  to the south by Ecuador and Peru;  and to
the west by the Pacific Ocean. 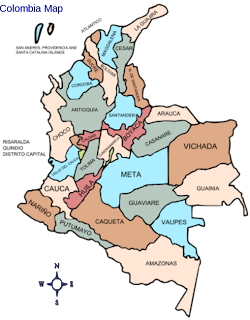 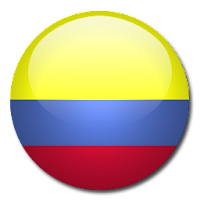 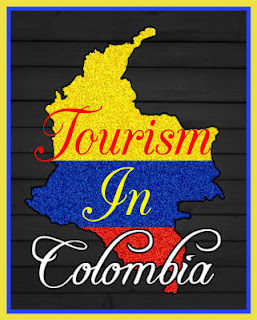 Colombia is now safe to visit and travelers are discovering what they’ve been missing. The diversity of the country may astonish you. Modern cities with skyscrapers and nightclubs

People say: ‘if only it weren’t for the violence and drugs, Colombia would be paradise.’ Well the drugs may still be here but the violence is gone, at least for now, and it is, indeed, paradise. It is an easy country to fall in love with, and many travelers do. It could well become your favorite country in South America.

Colombia has major attractions as a tourist destination, such as Cartagena and its historic surroundings,
Bogotá, the nation's capital, has become Colombia's major tourist destination because of its improved museums and entertainment facilities and its major urban renovations, including the rehabilitation of public areas, the development of parks, and the creation of an extensive network of cycling routes.
Bogotá owns the largest moorland of the world, which is located in the Sumapaz Locality.

Bogotá Tourist Destination
The hotels in the historical center of La Candelaria and its surrounding areas cater to lovers of culture and the arts. This area also has the bulk of hostels in the city as well. The hotels located near Ciudad Salitre are intended for visitors who make short stops in Bogotá or need proximity to El Dorado International Airport. Important landmarks and tourist stops in Bogotá include the botanical garden José Celestino Mutis, La Quinta de Bolivar, the national observatory, the planetarium, Maloka, the Colpatria observation point, the observation point of La Calera, the monument of the American flags, and La Candelaria. There is also Usaquen, a colonial landmark where brunch and flea market on Sundays is a traditional activity. The city has numerous green parks and amusement parks like Salitre Magico or Mundo Aventura. Just outside the city you can find the salt cathedral and very near candelaria you can find the Cerro Monserrate. . There are also several areas of the city where fine restaurants can be found. The G Zone, the T Zone and La Macarena are well known for their gastronomic offerings.


Shopping malls
There are more than 100 shopping malls in  Bogota  The notable malls are
Centro Andino, Centro Mayor and Santafé

Tourist Attraction in Colombia
Colombia has much to offer; whether you are looking for an affordable destination  Who want to experience the amazing Amazon rain-forest, while away the hours on a beautiful beach, or visit one of the thoroughly modern cities.  Here are some various alternative tourist attraction to visit:


Medellin
Medellín lies within the Aburrá valley and is bisected by the Medellín River (or Porce), which flows northward. North of the valley are the towns of Bello, Copacabana, Girardota and Barbosa. To the south of the valley lie Itagüí, Envigado, Sabaneta, La Estrella and Caldas. Medellin is certainly one of the most beautiful cities in South America, with plenty to see and do; a superb mixture of modern, bustling city, whilst retaining its unique heritage and beauty. There are many attraction and exciting things to do while in Medellin, from museums, visiting lakes, fishing, waterskiing, jet skiing, amusement parks, water parks, aquariums, visiting small “pueblos” or towns. Many many fun and exciting discos, parasailing, skydiving, many beautiful and modern shopping malls that are even nicer than the USA.  It is simply impossible to get bored in this city.

Medellin Women
A woman in Medellin also called a “ Paisa”, is seen by many as the most beautiful of the Colombian Latinas. A famous Colombian saying goes: "If you want a business type woman, go to Bogotá, if you want a pretty mistress, go to Cali, but if you want a beautiful wife, go to Medellin." 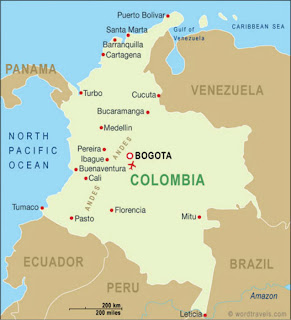 Amazon Rainforest, Colombia
The Amazon Rainforest produces around 20% of the worlds oxygen and contains half of the planets estimated species of plants, animals and insects. A tour can easily be arranged from Leticia which is the capital of Colombia’s Amazonas region and there are a number of jungle lodges to stay at (July and August is the driest time of year to visit).


Cartagena
Cartagena de Indias or Cartagena is another of Colombia’s popular cities which combines a wealth of history – to be found in the old walled city – with modern conveniences, 5 star luxury hotels and beautiful Caribbean beaches Cartagena faces the Caribbean Sea to the west. To the south is the Cartagena Bay, which has two entrances: Bocachica (Small Mouth) in the south, and Bocagrande (Big Mouth) in the north.


Time
Popular times to visit Colombia include the most famous festivals such as the Cali's Fair, the Barranquilla's Carnival, the Bogota Summer Festival, the Ibero-American Theater Festival and the Flower Festival is when the most foreign tourists go to Colombia. Many people visit Colombia during Christmas time and the celebrations surrounding the Independence of Colombia. The Ministry of Tourism considers high seasons the Holy Week, summer (June, July, August, September) and Christmas season. During the holy week many travel to the Caribbean Region of Colombia or visit popular landmarks like Las Lajas Cathedral, Salt Cathedral of Zipaquirá, the towns of Santa Cruz de Mompox, Guamal or Popayán where Roman Catholic traditions and rituals are performed, among others.


Travel Alert:
The UK Foreign and Commonwealth Office recommends against all travel to some areas and against all non-essential travel to others, please check with your relevant national government.

For many years serious internal armed conflict deterred tourists from visiting Colombia, with official travel advisories warning against travel to the country. However, in recent years numbers have risen sharply, thanks to improvements in security resulting from President Álvaro Uribe's "democratic security" strategy,

Email ThisBlogThis!Share to TwitterShare to FacebookShare to Pinterest
Labels: Republic of Colombia