Republic of the Equator is a representative democratic republic in South America, bordered by Colombia on the north, Peru on the east and south, and by the Pacific Ocean to the west. It is one of only two countries in South America, along with Chile, that do not have a border with Brazil. 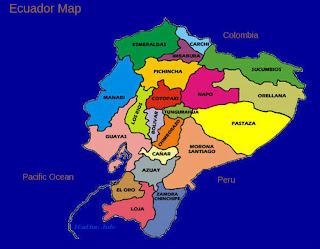 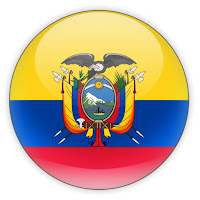 The Ecuador  also includes the Galápagos Islands in the Pacific, about 1,000 kilometres (620 mi) west of the mainland.Ecuador is divided into 24 Provinces. The Provinces of Ecuador and their capital are:


Quito, Ecuador
Quito or San Francisco de Quito, is the capital city of Ecuador. It is located in north-central Ecuador in the Guayllabamba river basin, on the eastern slopes of Pichincha,  an active stratovolcano in the Andes mountains.  Quito is the second most populous city in Ecuador, after Guayaquil. It is also the capital of the Pichincha province and the seat of Metropolitan District of Quito.

The Historic Center of Quito has one of the largest, least-altered and best-preserved historic centers
or Colonial Center  in the Americas.  Quito, along with Kraków, were the first World Cultural Heritage Sites declared by UNESCO in 1978.  The central square of Quito is located about 25 kilometres (16 mi) south of the equator. A monument and museum marking the general location of the equator is known locally as la mitad del mundo.

Newspapers and Magazines.  Spanish-language newspapers and magazines can be purchased on the streets of cities but can be hard to find elsewhere. Some hotels catering to foreigners may have a small selection of English-language reading material.


Other Cities Destination
- Ambato. The central city of Ecuador. Special celebrations during Carnival time.
- Baños.  The adventure capital of Ecuador at the foot of an active volcano having small eruptions of ash
and lava. Volcano Tungurahua. There are also many hot spring mineral baths as its name would imply.
- Cuenca.  The third largest city in Ecuador and listed as a UNESCO World Heritage Trust site
- Guayaquil.  Largest city in the country and largest port city
-  Loja.  The oldest colonial city
- Otavalo.  Small town only two hours north of the capital famous for its Saturday market of indigenous
crafts and livestock
- Ibarra, Town of 100,000 inhabitants halfway between Quito and the northern border.
- Riobamba .  Starting point of the famous train ride down the Nariz del Diablo and gateway to Mount
Chimborazo, Ecuador's highest peak

Email ThisBlogThis!Share to TwitterShare to FacebookShare to Pinterest
Labels: Republic of the Equator